I can't stop thinking about copyright. I had not given much thought to the fact that it would be such an integral part of nearly everything an archivist does especially in terms of digitization and digital media. It informs ethical decisions and guidelines, and can prove a huge obstacle in its interpretations.

Copyright and Cultural Institutions will surely be a valuable resource. The legal cases it alludes to are interesting resources for understanding how copyright plays out. I looked up the Roger v Koons case mentioned in the infringement section (70); it piqued my interest as an art history major, and Jeff Koons is a polarizing contemporary artist who's garnered recognition for his artistic innovation as well as for inciting controversy on many occasions; he makes his living appropriating ideas and tropes. In this particular case, Koons appropriated a postcard of a couple holding 8 puppies across their laps. Presumably regarding this as a trope that might as well be authorless (although he reportedly removed the copyright information), Koons sent the postcard to an Italian foundry to be made into a sculpture, reportedly asking for as close a copy as possible, albeit with several significant changes: adding color, making the dogs blue and giving them goofy white noses, adding daisies to the hair of the couple. Four sculptures were produced in the edition. Koons kept one and through "The Banality Show" sold the other 3 copies for a total of $367,000. 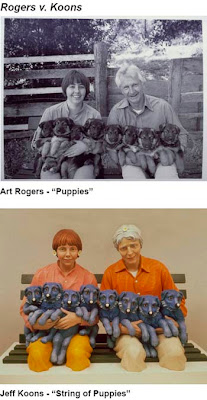 Art Rogers, a professional photographer who took the original photo, was only made aware of this when what appeared to be a colorized version of "Puppies" appeared in the LA Times Sunday Calendar in 1989. The man who comissioned the photo pointed this out to Rogers. They'd both been very pleased with the original, taken in 1980, and it had been licensed for cards like the one Koons had. Rogers sued Koons and the Sonnabend Gallery for $375,000 in compensatory damages and $2.5 million in punitive damages.

Koons claimed fair use, because his work was clearly derivative of Rogers' photo, and that his work was a parody, which would not have been an infringement of Rogers' clear copyright to his photo. However, the court found substantial similarity, and that a layperson would be able to see the correlation between the two works. Furthermore, they rejected the parody argument on the basis that what Koons was attempting to parody-banality of the sentimental, cute, mass-market greeting card variety--need not necessarily refer to this specific photo. Koons was ordered to pay damages and surrender the "String of Puppies" in his personal collection to Rogers.

What about the other 3 sculptures? Surely, Rogers had feelings about those, but they were almost as surely quelled by the equivalency of the money Koons paid him in damages. I find their continued status really interesting though, that the art is essentially illegal. Kind of taboo and dangerous!

Other interesting issues to me have to do with Koons' methods; most of his works are not directly created by him. This is an ongoing debate in art history, especially with modern art; how much credit to give to artists who do not execute their own works, but relay a specific idea to trusted fabricators. Could we say that all that belongs to the artist is the idea, then, which is not copyrightable? More realistically, the resulting work is made for hire, which reverts copyright of the object to the artist. It's interesting to think about, in light of the rules which are meant to protect creators and ease their monetization of their work, and to inspire creativity. I wonder how much direction Koons gives stylistically, because his string of puppies looks almost naive, like many of his similar derivative works. It's not terribly accurate, so I'm betting that he asked for the specific discrepancies in facial expressions and the like that you can pick out. Maybe he foresaw something like this happening and hoped that his changes would be "transformative" enough to protect him, a defense he has successfully used since this case.

Koons has launched his own offenses, most recently with a set of balloon dog bookends. My first thought is that you can't copyright a balloon dog. I thought of Hirtle's Idea/Expression dichotomy (page 10) which gives the example of a sketch of a spoon. You can copyright your drawing of a spoon sketch (in you automatically have copyright) but you cannot copyright the idea of spoon sketches. Koons definitely has the oversized metallic balloon dog sculpture market cornered, and these dogs are pretty consistent, although in varying sizes: they're polished steel, bright colors, bulbous. So while the product sold by the gallery, Park Life, is probably inspired by the Koonsian balloon dog as art phenomenon, I don't think Koons has a right to claim infringement. Balloon dogs are more or less commonplace objects. These particular bookends are fairly distinctive from Koons' interpretations, in size, shape, finish and color. And on a practical level, these bookends are not hurting his market. They retail for $30, while Koons' dogs sell for thousands. (Koons' bank account and reputation aren't hurting: even very recent work breaks records at auctions. I saw this Hanging Heart at Sotheby's, I still don't know what I think about it. It seemed dangerous. I do like his diamonds though.)

He probably doesn't have enough of a case in this instance. Like new media itself, copyright wasn't quite prepared for contemporary art and its weirdness. Another fairly recent instance of possible infringement in the art world comes from Richard Prince, as elucidated in this article. His ouevre is pretty varied, and has been since he came to prominence in the 70s, but one of his things is photographing-- or appropriating--ads and making blown up prints. The quality is reduced but the subject matter is still clear, as with his Marlboro Man series. He worked to decontextualize the lone cowboy from the cigarette ads themselves. He's done pretty well too, and had a solo show at the Guggenheim in New York a few years ago. This came to the attention of Jim Krantz, who shot some of the originals that Prince re-presents as his appropriated works. The article asserts that Prince is protected under fair use. I can't understand that, but apparently Krantz is willing to accept it, to the extent that he did not seek legal action; he just thinks he ought to be attributed. I think that is valid. Krantz retains his copyrights. Prince says he never really thought about ads having authors, before his work gained attention and the authors of those ads took notice.

I'm an artist, and I studied art history. I do like some of the work of Koons and Prince, so I'm not totally biased against this kind of contemporary art, and even the appropriated work, I can see the valid points that can be made. Neither denies that he copies others' work. It's sad that they can make so much darn money on it, by essentially putting an ironic spin on more "obvious" and commercial work. Copyright can prove to be very restrictive, but it's meant to protect creators, right? As well as inspire creativity. I think they're all valid artistic acts, but I think the big guys should be a little more polite.